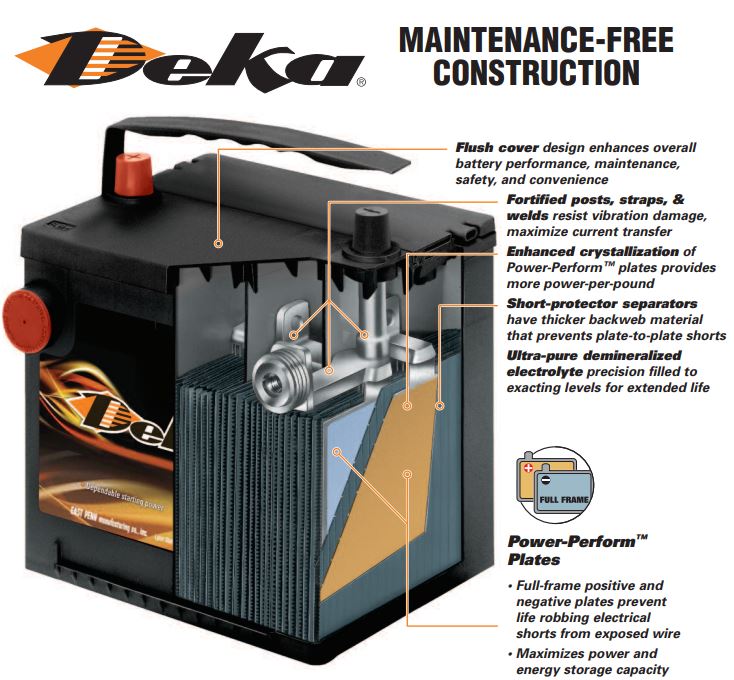 Are Deka Batteries Made In the USA?

Yes, Deka batteries are made in Lyon Station, PA.

Does Deka Have Batteries For European Applications?

Why is Exact Fit Important?

If the battery’s dimensions do not align with the vehicle’s recommendations, it might not have a good fit and suffer damage from vibration or clearance issues.

Why Are East Penn’s Power-Perform® Plates More Efficient Than Other Plates?

The plate plays a critical role in the performance of the battery’s overall power system. The ability of the plate to store and deliver power is directly proportional to how well it supports the vehicle’s power needs. Power-Perform Plates perform these functions with the highest efficiency enabling more power-per-space and better overall performance.

Precision craftsmanship, stringent testing, and consistent performance and quality analysis through advanced centralized laboratories ensure that Power-Perform Plates deliver optimized life, power, and durability, even under the most severe service. This means lower warranty claims due to fewer defects combined with better and longer battery performance.

Does AutoPro Stock Battery Applications Other Than Automotive?

How Does a Battery Work?

How Can I Maximize My Battery Performance In My Vehicle?

The battery is part of a system. When installing your new battery, it is wise to check related components. Follow all safety instructions when handling batteries! Always disconnect grounded cable first and connect it last to prevent dangerous sparks! Do not attempt the following vehicle maintenance without training or proper instructions:

Do not keep your battery at a low state-of-charge for long periods of time. Batteries will self-discharge if not used. Conventional automotive batteries perform best when they are at a full state-of-charge.

NOTE: Remember to always wear safety glasses and a face shield when working on or near batteries. Always protect your eyes!

Do the Best Batteries Always Have the Highest CCA Ratings?

No. Optimized power is not always reflected by CCA ratings. AGM batteries deliver power quickly to start the engine. A CCA rating measures cranking over a 30 second period. Cars today start in milliseconds due to improved electrical systems.

Fuel injection, computerized starting controls, and other enhancements allow vehicles to start quickly without the need for extended cranking. Premium batteries should deliver the right balance of life, power, and durability – not just starting power.

Does the Length of Driving Time Play a Factor in Battery Life?

Unlike fuel consumption, a longer length of driving time can be both beneficial and detrimental to the longevity of a battery. Beneficial in the sense that frequent starting without enough time for the alternator to recharge the battery can be hard on it over time. Conventional automotive batteries perform best when they are at a full state of charge.

Adversely, the longer the vehicle is in use, the more vibration and shaking it undergoes. This can also cause additional wear on the battery over time as well. The hardest scenario on a battery; however, is not using it at all. Batteries that sit for long periods of time can lose power or self-discharge. If discharged for too long, this can cause permanent damage to the battery to the point where it cannot be recharged.

What Are Some Common Causes of Automotive Battery Failure?

Accidental power drains (like leaving your headlights or dome lights on) that discharge the battery to the point that it doesn’t have enough power to start the vehicle. Draining the battery to a very low state-of-charge can do permanent capacity damage.

Another common cause of battery failure is from putting the wrong battery in the wrong application. For instance, if the vehicle requires a certain amount of starting power, installing a battery that isn’t designed to provide that much starting power will quickly wear out to the point of a no-start situation. Also, if the battery’s dimensions don’t align with the vehicle’s recommendations, it might not have a good fit and suffer damage from vibration or clearance issues. Always pay close attention to the Battery Application Guide and specifically follow its instructions.

Higher temperatures also have a detrimental effect on battery life. However, in the cold, oil and transmission fluids are more viscous so getting the car started requires more energy. In general, extreme temperatures, hot or cold, have an adverse effect on battery life. However, it’s the heat that does most of the damage, but more batteries actually fail when they’re put to the test in the cold.

With Engine Compartments Getting Smaller and Vehicles Needing More Power to Operate the Complex Vehicle Electronics, What is Happening with Battery Technology to Keep Things Running Smoothly?

The consumer driving experience continues to expect increased electrical functions and features, which forces vehicle electrical systems, and the batteries that help power them, to become more durable and efficient. The automotive industry is on an upward trend toward the use of Enhanced Life Flooded and AGM (Absorbed Glass Mat) products as a vehicle’s Original Equipment battery. These enhanced battery technologies add additional durability to the battery’s design to enable it last longer under less than ideal circumstances and demanding accessory loads. This helps accommodate complex vehicle electronics and the demand they put on the battery. An AGM design is also spillproof and valve-regulated. This makes it safer to put in more non-traditional locations like under the seat or other areas that would allow for more space under the hood for other engine components.

Why is Installing Batteries in Vehicles More Complicated Than it Used To Be?

Mostly towards the end of the 1990’s, some of the biggest consequences to disconnecting the battery resulted in losing radio settings, seat positions, and side-view mirror adjustments. As we progress into the 21st century, the stakes of not taking the proper precautions before and after disconnecting the battery have increasingly become much higher as well as the need for more sophisticated methods and a broader knowledge base for adhering to these precautions.

For example, for most modern vehicles, the engine’s computer records things like engine misfires and oxygen-sensor performance, and confirms that, over time, the emission-control system is doing its job. Once battery power is disconnected, those settings are cleared and the vehicle needs to relearn this data. The impact of losing data collected by the vehicle can result from something as inconvenient as to failing an emission’s test (depending on the state of inspection) to something much more serious like damaging the battery due to incorrect voltage output settings. Several BMW, Audi, and Lexus vehicle models require the computer system to be reset after battery replacement. Mercedes-Benz models have specific instructions in the owner’s manual for electrical set up requirements, and a few Infiniti models even require the shift release to be reset after battery replacement.

While more extensive procedures can be found in higher end vehicles, other models are in no way immune to extra steps involved when disconnecting the battery. Hundreds of vehicle models require additional steps or precautions when replacing a battery which include:

Any who replaced a battery should closely regard the need for system resets, safety precautions, or specific instructions when replacing batteries in modern vehicles. Be informed of what the individual owner’s manuals require for battery replacement as well as the numerous guides and resources that solely focus on battery replacement and reset procedures. 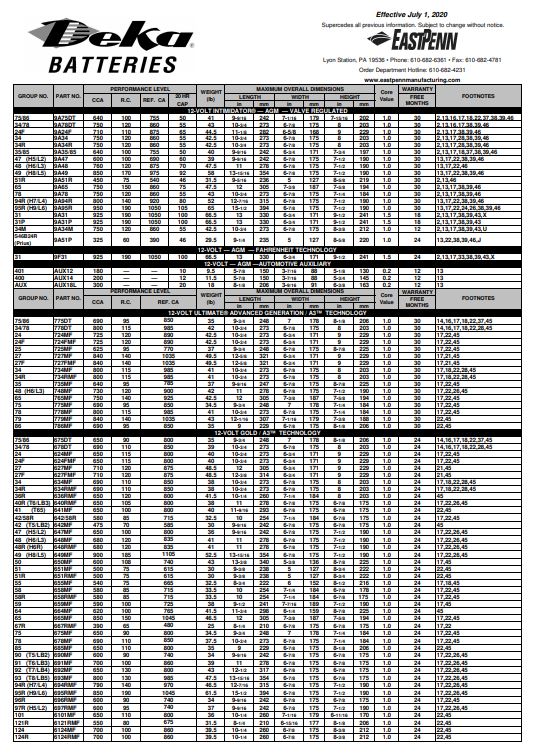 The technology behind today’s vehicles is changing at the speed of light. And the next generation of cars and light trucks is demanding more – a lot more – from their batteries.

For power-demanding applications performed by heavy-duty trucks, buses, and equipment, East Penn delivers the broadest selection of commercial power solutions in the industry.

The leader in the industry’s most premium Power Sports battery, East Penn offers a superior product that requires no activation or adding acid of any kind.

From the hottest summer to the coldest winter – no other lawn and garden battery provides maintenance-free performance like the rugged Outdoorsman Battery from Deka.

Get all the power you need for your golf car or electric vehicle (EV) applications – with high-capacity, deep cycle batteries from East Penn.

Get dependable power for all your floor care applications – get the high-capacity, deep-cycle Pro Master® Battery from Deka.